I had a ride organised with Kingy and a few of the boys for the last Tuesday of easter.
We intended to head up into Hickeys Creek road and over into Thumb Creek, via Taylors Arm.
Well the weather was crap, to say the least. I wasn't real keen on climbing out of bed.
But it takes more than a bit of rain to keep me off my bike so I geared up and away we go.
Riding through Kempsey I spot some loaded up adventure bikes at the servo.
A couple of DR650SE's and two KTM's. A 640 and a 690.
I pulled up for a quick yak and asked of their intended route of travel.
They planned heading up the big hill to Armidale and then on to Coffs Harbour.
I arrived at Kingys, who was waiting for more riders to turn up.
I heard the ADV bikes heading past and was torn with which ride I should join.
Well, they could only tell me to fark orf, so I headed west to Willawarrin. 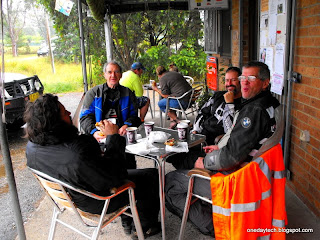 There I met the crew having breakfast. I introduced myself and requested permission to tag along.
They seemed like a nice easy going bunch of blokes and it was not a problem to join them. 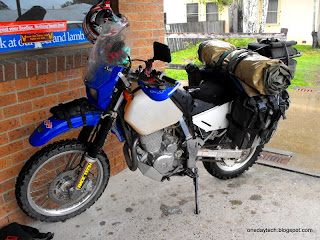 We geared up and headed towards Armidale.
It rained off and on and the dirt section was as slick as goose poop.
The grader had pushed some nice grey clay over the surface and it was "interesting" to ride on.
I tucked the front end under in a slow corner and fell like a bag of shit.
Very embarassing. But not uncommon for me.

My mates will start calling me "horizontal".
I quickly showed the ADV boys a couple of choice camping spots then left them at Georges Junction.
Very nice to meet you all fellahs, G'day to Guy - Tim - Al and Dave.
Hope you all had a good ride home. 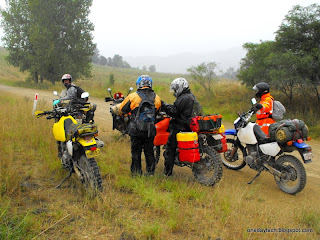 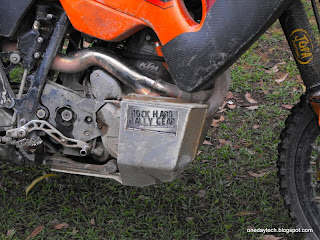 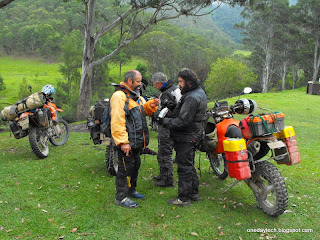 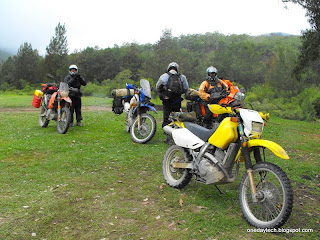 I'd had plans of taking a few of the boys up the big hill towards Glenn Innes and Inverell.


It seemed logical to do some recon and see what was in store.


The day started out nicely, plenty of sun and good temps.


The difference in vegetation once you get up on the armidale side is quite interesting.


Its so green in the Macleay at the moment.


Past Wollomombi you'd think they were still in drought. 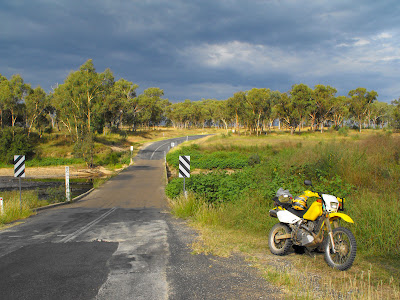 Pete had the idea that we might head to Taylors Arm Pub for lunch.
The hard way.
Roses road is not used often, and network of old logging roads runs off it.

It was pretty wet and the track was littered with deadfall trees.

Some of them required all hands to pass the bikes over, or under.
Pete thought he could skirt one by heading down the ravine.

The main problem was it got steeper and traction was poor.

By the time he stopped, the bike was hundreds of feet down a steep sided gully.

Phil and I roped it off so it would not progress any further.

Then we dragged the wheels one at a time until we could stand the bike up.

Using some trees as a belay point we hauled and clutched the bike up the hill.

The Taylors Arm Pub was a welcome stop, as they had the potbelly stove stoked up.


We all steamed for a while then ordered some lunch.


There's plenty to look at with all manner of tools and antique gear on the walls.