I pulled into the Bark Hut Camping ground on Mount Kaputar fairly late.

Camp was set up quick and simple and I put some tea on.

It was getting a bit nippy and the wind was up.

Amazingly I found a hot shower facility and scrubbed myself squeaky clean.

Then cooked up some silverside with plenty of veges.

A beer or two with a couple of Scotch chasers made for a good sleep. 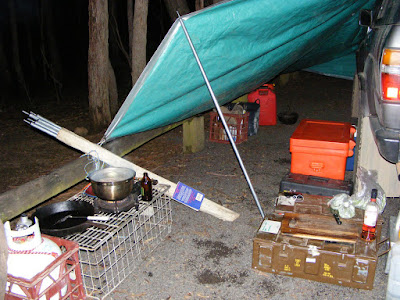 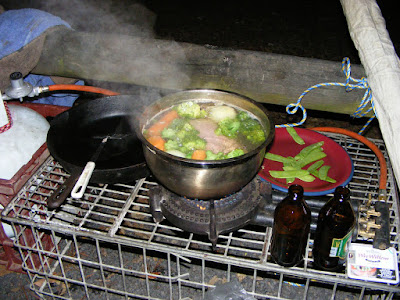 Up early for a tour of the lookouts.

The Governor. An eroded trachyte plug. 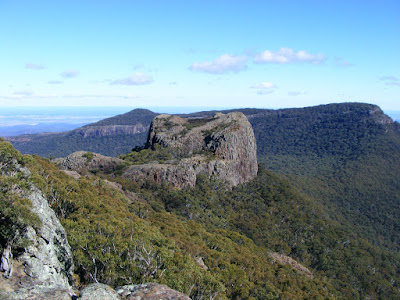 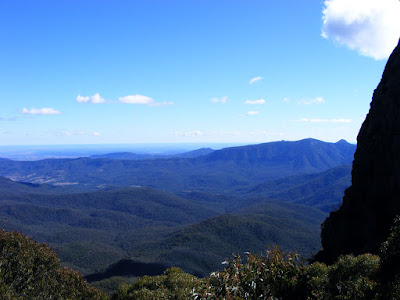 I'll come back and do the Barraba Track one day.

Hopefully on the bike. Bit of a map for you. 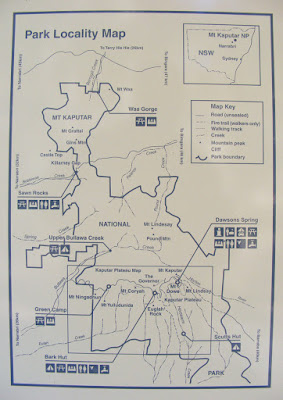 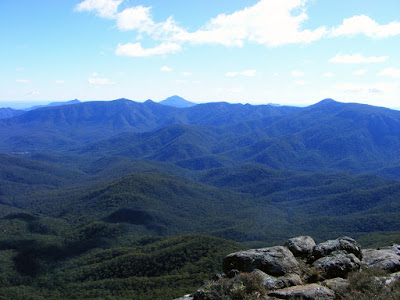 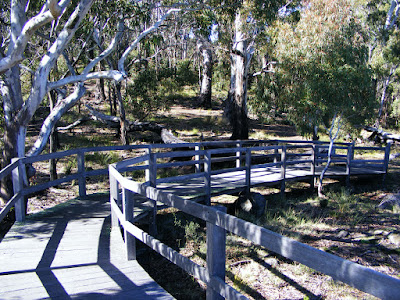 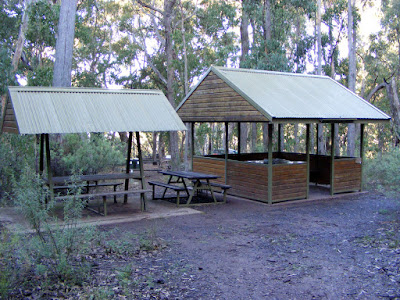 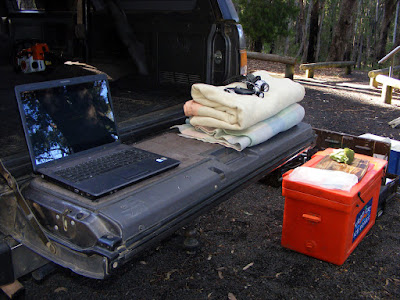 Mum and a little one come in to say g'day. 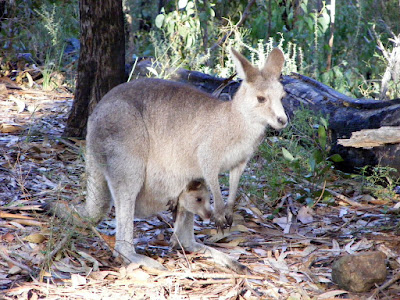 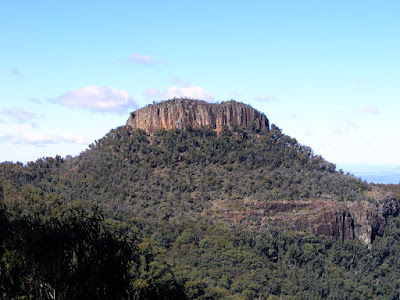 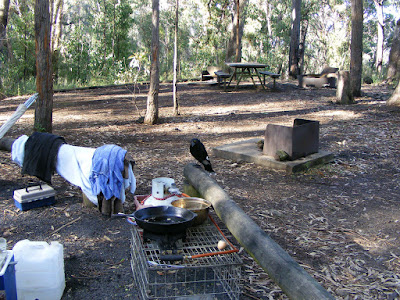 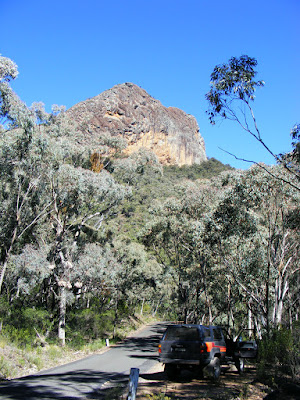 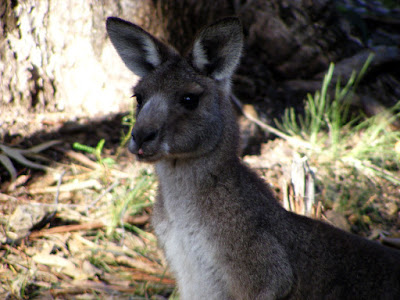 The temps dropped severely during the night, but I was still comfortable.

Luckily I had two quilts to sleep under. 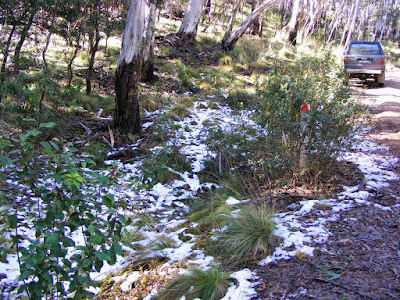 Walkway to the summit. 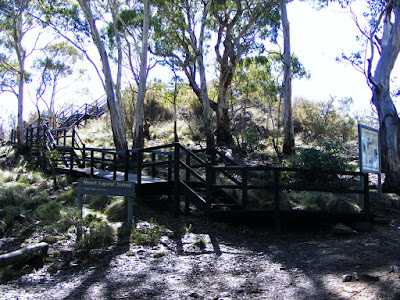 The towers at the top make your fillings hum.

I won't stay here too long. 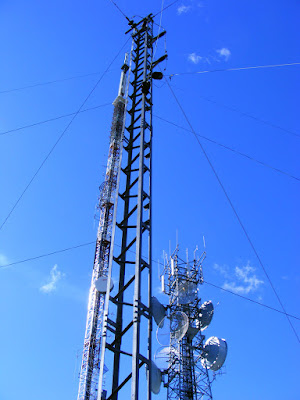 Then down the road to Tamworth.

Kaputar is a great destination.

Check it out soon. 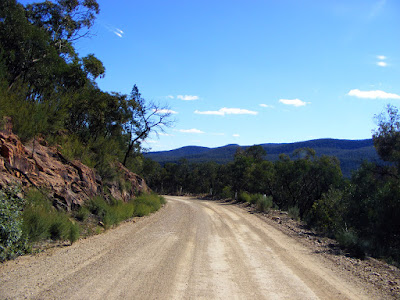 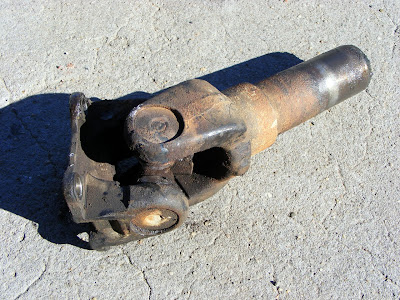 I'd noticed a slight vibration through the car on leaving Lightning Ridge. The front universal joint appeared to have some play, so I packed it full of grease hoping to at least make it home.

I got past Weewaa and it became more pronounced, and by the time I hit Narrabri it was vibrating so badly I had to stop. I pulled into the Tapscott Services Shell Service Station on Lloyd St and asked the young fellow if I could use the parking area to do a bit of work.
No worries at all he says, knock yourself out. Luckily I'd been carting a spare uni joint in my toolbox for a year or so, and set to removing the prop shaft.

I had an old bulldozer tooth as a bashing base and a socket which I used in an attempt to drive the caps out.I was at it for over an hour. It was just to hard, the uni needed to be set in a vice.

I called my NRMA road service as a last resort. I can deal with most things but without the right tools it was a waste of time.

About an hour later the NRMA flatbed recovery truck pulled in behind my Hilux. I got out and went to greet him as he got out of the truck. He pointedly ignored me and walked around my car with a pissed off look on his face, then without a word got into his truck and drove off.

I was thinking "well this is great, the bugger cant even say g'day to me. Let alone help me".

Another half hour later an old bloke pulls up in the service vehicle. I explained the situation and he walked around tut tutting and says "Mate I cant help you. This is a workshop job".

Now In a former life I worked for local council, servicing and repairing heavy machinery and fleet vehicles. Its not rocket science to replace a uni joint. I told him that all I needed was a vice.

Oh no no, I cant help you he says. But call this bloke tomorrow and he can do the job for you.
"Its the best I can do" he says..

I ask him, "well why do I pay for road service then?"

He tells me "You pay for road service, so when you break down 160kms out in the fucking bush I can come and tow you back".

It's at about this point that I lose all interest in discussing the matter with him. Its obvious he has no intention of helping me get going. Its a huge difference between the bloke who helped Craig flog the seized wheel bearing out of his Rodeo at Inverell.

So, I'm looking at sleeping in my vehicle, on the side of the road. I've got bugger-all money.
Im hot, dirty and just a bit pissed off. The young fellow from the servo comes out to inspect my progress. I tell him about the NRMA bloke, and he is not surprised I'd got no help from him.

"Thats Bert and he's a sour old bugger" he states. A pretty descriptive sentence I'd agree.

Anyway, he reckons his dad has a full workshop, and seeing as he's knocking off in half an hour I could ride out with him and we could fix the uni.

Now at this point its like an angel from heaven has come down to save me. I had to be home to open the business on Monday, and time was critical.

So off we go, and I get to meet Mick, whose a top bloke just like his young fellow.

Between the two of them they knocked the job over in 30 minutes. They were quite efficient and rather than get in their way I let them go for it. I passed a $50 note to Cam as a small token of my appreciation, and back to the servo we went.

A big thanks to Cam Shields and his dad Mick. You wouldn't meet two nicer blokes.

So I fit the prop shaft and fill up. Im heading up Mount Kaputar to camp tonight.
Posted by Ian at 8:01 PM No comments: