I was watching an RZ250 on eBay a few months ago. It wasnt far away and I scored it for $400.
It was described as "in good condition for its age".
If thats the case Amy Winehouse is also in good condition for her age..
Nearly every bolt was stripped or had UNC coarse threads inserted into metric holes.
Every piece of plastic was cracked, glued or fiberglassed.
The frame is rusted to hell and its abviously been down the road several times on both sides.
It looks a though a drunken chimpanzee has thrown it around for a year or so.
All I really wanted was the tank, and when I asked the seller about it he described it as "pretty good".
Bullshit.
He'd attempted to bog gaping rust holes and then Kreem treated the inside without removing the fuel tap. It was farked. Anyway.. still I could use some of the parts.
And they are getting harder to find. So I bought it. 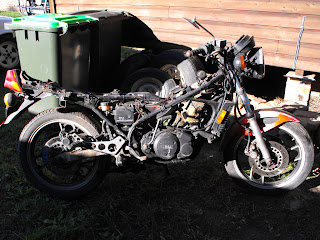 I spotted another RZ350 on ebay a few weeks ago with a $400 "buy it now" option.
It seemed pretty rough but for $400 it is pretty decent value. If I was so inclined I could break it down and part it out for a profit. But that goes against the grain. I'd prefer to have some spares or restore it. The seller was a bit of a character and we got to talking bikes over the phone. Luckily he was heading down the coast and said he could deliver it as well.
How good is that? 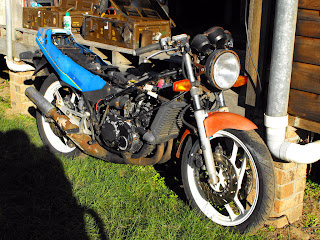 I purchased an old RZ350 4-5 years ago. The owner had been killed in a car accident. I had known Darren for nearly 30 years so I was very upset when I heard of it. He was a man who seemed bulletproof. Over the time we'd had some great adventures on bikes and in the bush. I helped him build his house and pretty much lived there for a while. The parties we had were massive. Good times. It was a terrible shame he didn't get to see his kids grow up. 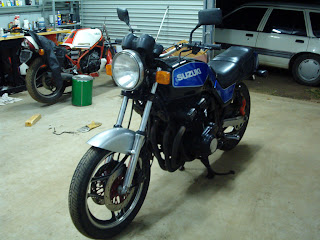 Anyway I dragged the old bike out the other week and fired it up. A bit of clean fuel down the carbies and it kicked over and idled. So I started stripping it down. The rust had come through the paint in several places and the frame had some holes in it. I got my trusty Porto Mig out and braced the weak areas. Several coats of paint stripper and a hit with the pressure washer got it almost clean. The rest I'll do with a wire brush and a bit of wet n dry paper. 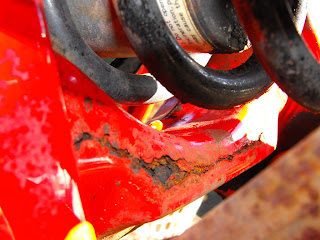 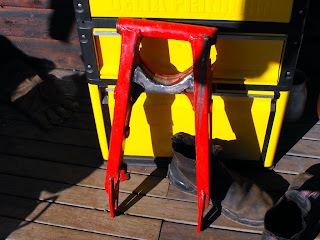 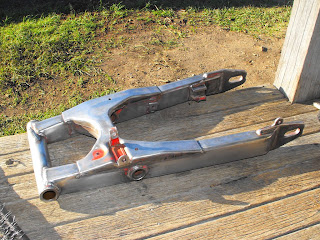 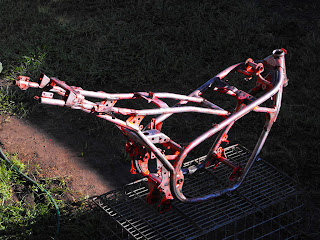 A large rock in our driveway entrance had become quite intrusive. Michele and I decided to attack it with crowbar and shovel. We found it was larger than first expected. With the help of the trusty rusty Hilux we got it out and away. The photos make it look easy. 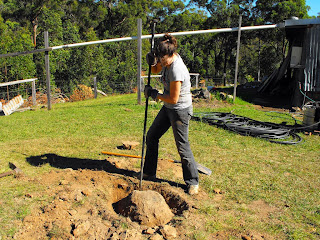 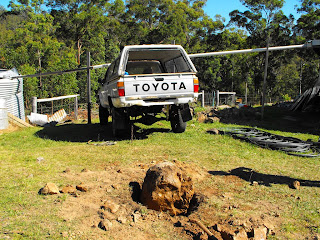 When the day is almost done, we sit and have a glass of wine and watch the sun go down. 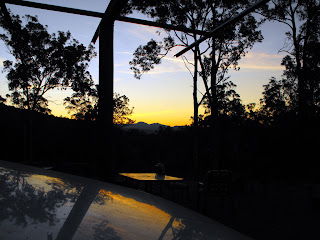 Last Saturday we observed some strange black clouds over Mount Sebastapol.
They were a long way from us and very large
The appeared to coalesce and dissipate randomly sometimes assuming almost solid shapes.
Michele and I were amazed to see one take on the traditional UFO silhouette.
It looked quite solid and substantial. Not blurry or cloudlike at all.
My camera refused to focus on it for some reason. But it was quite distinct and vaporised in seconds. Birds? Bugs? Smoke? I dont think so.
Seemed to high for bugs, and to massive to be birds.
Smoke doesn't come and go. Very unusual.
We both observed the phenomenon for over 30 minutes.

A young fellow in England painted a 60 foot penis on the roof of his parents mansion. He was hoping it would show up in Google earth.

Ive been a fan of the Fred Gassit series ever since I was a young lad. Usually the first pages I'd turn to in Austalian Motorcycle News magazine. Some clever gentleman has uploaded a heap of gassit cartoons to the web.

You can find them here>http://members.tripod.com/fredgassit/
Posted by Ian at 9:20 PM No comments:

I've been hungry enough to eat things that would make a billygoat puke, but some of the stuff that Steve eats (in the name of science) amaze me. Whats more amazing is that most of these products are manufactured for consumption at all.

Read about it here>http://www.thesneeze.com/steve-dont-eat-it/
Posted by Ian at 8:51 AM No comments:

I just had a "cold call" from some patronizing gent claiming to represent Local RSL Club.
He wanted me to purchase advertisement on the clubs beer coasters.
Now I hate cold callers, Ive put myself on the "do not call register" and it seems to have worked quite well. But local callers still grab your name from the phone book.
They seem to enjoy wasting my time and treat you like youre an arsehole if you dont give them any money.
My RSL has never supported me by requesting my services.
Why should I support them?
Posted by Ian at 12:47 PM No comments: